Welcome to my online gallery

I am a self taught artist and aim to capture atmosphere and realism in my paintings.

I began painting when I was ten years old and on leaving school I was offered a three year art course but could not take it up through financial circumstances. I continued painting part time along side my full time employment as an engineer.

In 1980 nine of my paintings were used in the film ‘Raise the Titanic’ which was partly filmed in St Ives and starred Sir Alec Guinness.

During 1988 I finally made the jump, I gave up engineering and became a full time artist, opening the Digey Gallery in St Ives to display my paintings and also offering a picture framing service to help supplement the painting sales throughout the year.

In 2011 after 23 years and at the age of 76, I decided to retire from the gallery lifestyle that is, it was time to slow down a little.

I still paint, but now from home as a hobby. All my paintings are available for sale and can be viewed from various locations around West Cornwall.

So if you’re sat in a cafe or restaurant have a look at the paintings, you could be looking at one of mine in the flesh.

If you like my style and have a picture in mind, please feel free to contact me and discuss commissioning your own painting. 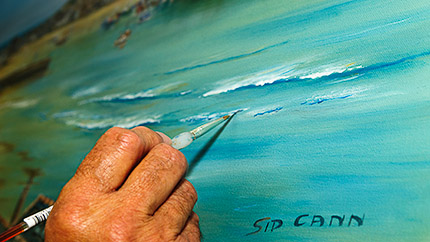